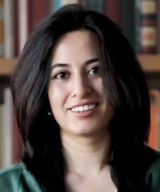 Lourdes Gabriela Daza Aramayo, Ph.D. She is Co-founder of Anglo American University and the Director of the Program EU-LAC at this university. At the same time, she is Director of the Latin American and the Caribbean Business and Studies Center in Prague (LAC-Center). From January 2019, she is EU-LAC relation Chair at the European Institute of International Studies.

She is Member of the Bi-Regional Academic Council of the Permanent Academic Forum Latin America and Caribbean-European Union. She has been the Executive Director of the Center for Latin American Studies at the The University of Economics, Prague in the Czech Republic from 2008 until 2018. She was a lecturer in the Department of Economics and International Trade at this University.

The EU-LAC relations Chair is an initiative proposed by the European Institute of International Studies (EIIS) developed within the frame of the IBERO-EU-AMERICA Consortium, and presented in Brussels during the II EU-CELAC Academic Summit on June 9, 2015.

Description:
The latest developments on the global stage have brought about a series of important changes which have had a series of effects and repercussions on the European Union-Latin American and Caribbean relationship (EU-LAC).

In the first place, the surge of new global actors, with powerful emerging economies and an increasing political sphere of influence—a phenomenon which is not unknown in the American continent—is the clearest and most immediate fact. From this perspective, the economic development of many Latin American and Caribbean countries, from the low to the middle-income spectrums, has generated a new political economy, and social context which promises, on a global scale, a greater prominence and relevance for the region as a whole. Meanwhile, the European Union has begun to display a
more focused attention on this development and has exhibited increasing interest towards the Latin American and Caribbean region.

However, the EU’s attempts to establish interregional treaties of association and commerce with the LAC have produced, up to this moment, limited results, insofar as to this date, only two successful examples of these accords exist the Economic Partnership Agreement with CARIFORUM and the Association Agreement with Central America.

Nevertheless, several factors, external and internal, must be considered, both in order to explain the present situation and to assess future prospects.

China, India, and Russia increasing political, economic, and commercial clout have modified the global outlook so that some of the most pressing priorities of the region have turned towards achieving greater engagement with the Asia-Pacific region.

Internal crises in the respective regional integration processes, both in Europe and in Latin America and the Caribbean, have sharply decreased the efforts needed to fill in the gaps of mutual ignorance regarding the respective dynamics of change in each region and enhancing the relationships necessary for a renewed encounter between both areas.

The Chair includes the organization of seminars and conferences (related to the topics on the strategic agenda and the approved proposals at the EU-CELAC Summits). Creation and implementation of courses (academic post-graduate programs, training programs for high-ranking officials). Studies, policy reports, and publications.